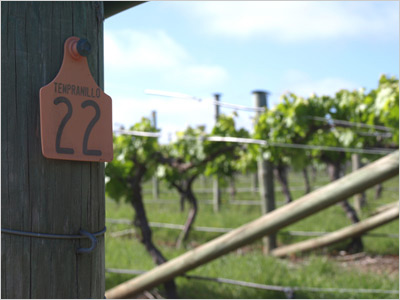 Their first vintage was in 2007, after winemaker Peter Leske could not get the imagined aroma and taste of a pale, dry, fine Tempranillo rosé out of his mind. He knew an Adelaide Hills vineyard which produced fruit perfect for the wine… and La Linea was born.

Back then it was a ‘newbie’ grape, of course… but Tempranillo is no longer really an ‘emerging’ grape in Australia. Just like in its home in Spain, we know it well enough to make a diverse range of styles, from crisp rosés produced for summer drinking, to robust, long-living reds.

The team has also made dry red Tempranillo for over a decade, and always in fundamentally the same style: medium-bodied, with the variety’s typical fleshy mid-palate, drying tannins, and consciously lower alcohol than many contemporary Aussie reds. And a fragrant lift which is delicious!

While passionate about Tempranillo, the team is not entirely focussed on one variety. In 2008 they made their first Adelaide Hills Riesling, in a carefully ‘off-dry’ style: the Vertigo ‘25GR’. In some years this is complemented by the Vertigo ‘TRKN’, a bone-dry (German: ‘tröcken’; gettit?) version from the same batch of fruit.

And since 2016 La Linea has produced Mencia, grown near the winery at Lenswood. This variety has its home in north-western Spain, where it is traditionally made into a light, relatively fragrant red for early consumption. The La Linea style is now well established: brilliant purple in colour with a powerfully peppery nose, and a vibrant, crunchy palate. The team also makes very limited quantities of dry, barrel-matured, textural Mencia rosé.

The seasons turn… nature throws up new conditions… vines mature… wines are made. The La Linea team thrives on the grounding influence of grapegrowing and winemaking, where the cyclical nature of the seasons offers annual renewal and challenge.